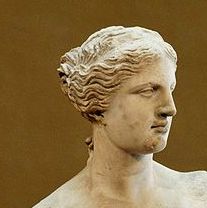 There’s something special about the Venus de Milo. I can see her sculptor finishing her and standing back, covered in white dust, feeling awed that this serene lady captured in stone had come from his hands. She was found in 1820 (during the Regency). She’d somehow become buried in a niche in the ancient ruins of Milos on the Aegean island of Milos and forgotten. Sculpted by an Alexandros son of Menides, citizen of Antioch some time between 130 – 100 BC, she’s made of marble and slightly larger than life. She was apparently made to be seen from her right. Her left arm (now missing) was outstretched, her hand holding an apple the symbol of Venus, the goddess of love and beauty. She is still enthralling people over 2000 years later. Minolta, the camera people, have done a study of the sculpture using new technology that shows her like she’s never been seen before. If you’ve never seen her in real life, or even if you have, these new images are so beautiful. Many people today think art is about ugly controversial objects created to shock or upset the viewer. Once upon a time, it was only about ceating beauty. Have a look!  The Venus de Milo

Victoria asked if I could share more photos and since I did take some today…here are some things I saw in my walk in Burghley Park. The people who own the land let the public use it until dark. There are deer and sheep so even though we live in a little town for a few minutes you feel like you’re in the country. END_OF_DOCUMENT_TOKEN_TO_BE_REPLACED

When I woke up the sun was shining and it looked like a gorgeous day, so instead of going back to bed I decided to take the camera for a walk and see if I could find some pictures. I walked like a snail, but by the time I got home I was really tired. I’m so glad I didn’t go back to bed…at least not until after I got back from my walk! I had to share some of the pictures I found in sunny Stamford this morning…or yesterday morning… END_OF_DOCUMENT_TOKEN_TO_BE_REPLACED