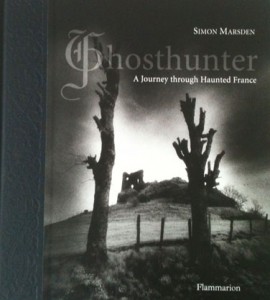 This last week I needed a treat so I ordered “Ghosthunter A Journey Through Haunted France” by Simon Marsden. For some reason I thought it was going to be a real ghost story book with photos, but it turned out to be more a photo-journal of purportedly haunted places with a few notes of ghostly happenings and or the author’s feelings as he walked around taking photos. If I’d understood what I was buying I’d still have bought the book (and loved it), I just wouldn’t have felt disappointed that I wasn’t getting a proper “story” for each site. That is my only negative comment. If you love France, black and white atmospheric photos of ruins and the macabre, notes of ghostly happenings, grisly histories and a list of  magical looking locations you’ll have to visit to see for yourself if they are haunted…I highly recommend this book!

Marsden visits quite a few ruins that were once important French Castles/fortified dwellings. Unsurprisingly, most of these places in the distant past were often owned by power-crazed psychos who caused mayhem and misery. One of my favorite site is entitled “Eternal Damnation” at the Château de Orthez (in the Pyrenees). All that remains of this chateau is the Moncade Tower and a few ramparts. The ghostly happenings are blamed on the actions of one Gaston Phebus who lived from 1331-1391. As a warrior he increased his power and influence, but this man wasn’t just a backwoods thug who lived in a fortress. Gaston was a cultured pyscho! We know quite a lot about Gaston because he wrote a book, ‘Livre de la Chasse’ (literally in English – ‘Book of the Chase’). It’s known as the definitive medieval study on hunting tactics. Gaston was a hunting fanatic (known as one of the greatest hunters of his day) and by his own admission adept at killing things. At least one copy of the book was an illustrated manuscript with beautiful miniature paintings (maybe there was more than one I’ve no idea – you can buy modern printed copies of this manuscript) so you get to see Gaston in action killing endless fearful creatures. The ghostly happenings don’t actually relate to his hunting addiction, but his prowess at killing sets the scene.

“In 1380 Gaston’s only legitimate son was traumatized when his mother, Agnes de Navarre, was banished from the castle by his father. Agnes’s brother, Charles le Mauvais (Charles the Bad!), the King of Navarre, was equally outraged: he began plotting his revenge using Gaston’s son, also named Gaston, as a pawn. He presented the boy with a pouch filled with a mysterious powder, telling him that it was a powerful love potion and that he must put it in his father’s food. This way, Charles promised, his father would fall in love with young Gaston’s mother again and beg for her return. The gullible prince agreed, but somehow the purse fell into the hands of his jealous illegitimate brother, Yvain, who gave it to his father. Suspecting some form of treachery, the count covered a piece of bread with the powder, and fed it to a dog – with fatal results. Over the following months, the prince’s servants and friends were mercilessly tortured to disclose the name of the plotter. Gaston’s son had so far been spared such horrors, but locked in a cell, was starving himself to death rather than betray Charles. Late one night in exasperation, Gaston went to his son’s cell in a final attempt to reason with him. Still the young man refused to talk; his father, in a fit of rage, stabbed him through the neck, killing him. It is said that his pathetic ghost still haunts the tower and the screams of his friends can be heard echoing from the dark dungeon. According to French historian jean Froissart (c.1337-c.1404/5), from that day on Gaston was a changed man. Finding it hard to sleep, he always left a lit candle by his bed – some said to keep the phantoms at bay. He was to die a broken man in 1391.”

Personally I think this story has some serious holes. I found a bit more information on the French Wiki which may or may not be correct: Gaston Phebus (called Phebus because he was beautiful like the God Pheobus); as well as being a skilled hunter he was a skilled musician, composer and poet. He married Agnes 5 July 1349 when she would have been about 15. There is no proof or testimonial that Gaston the son either died in prison or by his father’s hand. The story could have been concocted by Gaston Phebus’s enemies or he could have killed his son. I couldn’t find a birth date for the “boy” but when he died in 1381 his parents had been married for 32 years and his mother was about 47. It is possible of course that after twenty years she finally carried a baby full term or got pregnant (this has been known to happen), but it would make sense that the boy was mid to late teens. He was already married (without issue) not that a marriage means anything as children born to a Comte (a French count) or a Prince tended to be promised-married from the cradle. Agnes died the 4th of Feb. 1396 so she outlived her husband by five years.

This is what I think happened: Agnes loathed her husband. Perhaps she fell in love with him when they married, but finding she’d have to share him with a young mistress she began to hate him. Perhaps she longed for numerous children but he failed to satisfy that longing (while his mistress had at least five surviving children) so she blamed him for her lack of children. I’ve read that in the medieval ages it was believed that if the woman wasn’t “satisfied” by her husband she wouldn’t conceive! Over the years she came to hate him…and eventually saw a chance to get rid of him. She gave her son a pouch of “magic powder” and told him that if she was sent away he was to put some of the magic powder in his father’s food so his father would fall back in love with her and she’d be able to return. Whether her son was young or gullible he believed her. Agnes embarrasses her husband (on purpose) in front of his hunting friends (mocking his manhood would do) and is sent away in disgrace setting in motion her plan. Unfortunately, her son’s half brother by the mistress sees him with the pouch and grabs it and demands to know what it is. The answer gets it taken to their father who then feeds the dog and learns its poison…the son ends up in the dungeon, but he refuses to admit who gave him the poison. He can’t say it was his mother as that would sign her death…her husband would legally drag her back to his lands and execute her…so the boy refuses to talk until the father in a fit of rage kills his child.

Feel free to concoct your own version of events. That’s history; even if you’re in the middle of it. Depending on the perspective of the teller the story can be completely different.

Yvain became good friends with the French King, Charles VI (known as ‘The Mad’) and was one of the King’s four companions who as part of a celebration for some Princess thought it would be a great joke to dress up as savages and come in and dance to the music… Why they thought this would be entertaining is anyone’s guess, but these five men (Yven is noted on the French Wiki pages as The Bastard Yvain de Foix) after putting on a linen body suit they were covered in oakum mesh and highly flammable pitch. Yes! In the era of torches! Because the costumes were highly flammable the torch bearers were ordered to stay back, but the King’s brother (who’d spent the previous night reveling at a tavern) came close to see if he recognized the faces of the men and pooof… All the men went up in flames. Only the King survived because he motioned to one of his female relatives who recognizing him, immediately threw her cloak over him. Call me a cynic, but if that brother was in line to inherit the Crown…how accidental do you think his action likely to have been? Who knows! Here’s a painting of the event… 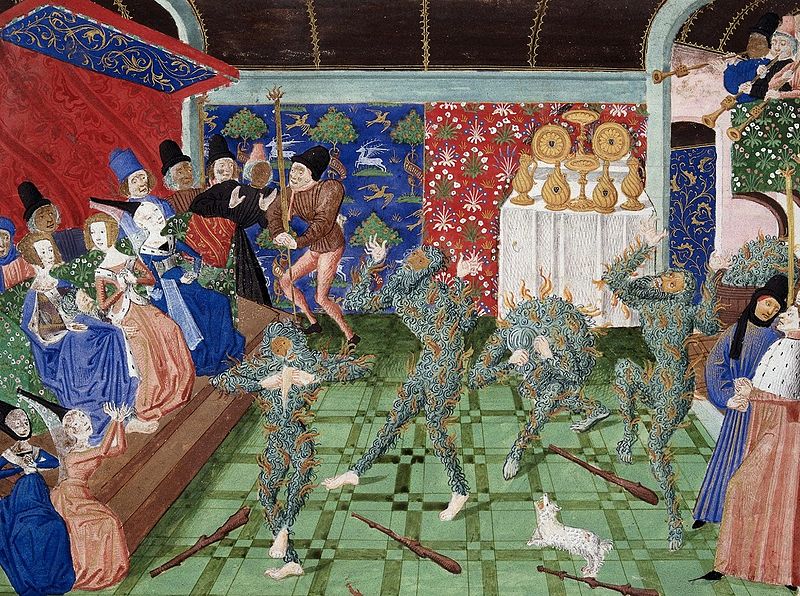 The uncle, “Charles the Bad”, after a life time of scheming, killing, impoverishing his lands and people and generally causing mayhem etc he too burned to death. Suffering some sort of skin complaint his physicians recommended he be put in an alcohol soaked cloth bag. Some blame the maid who was supposed to stitch up the sac around his neck and instead of using scissors used her candle to sever the string and set her employer on fire…doubtless his ghost is still screaming…somewhere. After reading some of his exploits, I wouldn’t be surprised if the maid set him on fire on purpose…perhaps to revenge the death of a lover or family member. Who’s to know?

Whatever the truth I now have to visit the remains of the Château Orthez!

If you go beware: The tower is said to be haunted by the pathetic ghost of the Gaston (the younger)…if you hear any unexplained screams coming from the dark dungeons…(after running away from the place) do let me know!