While I was in Aldeburgh last Saturday I found a book called The Haunted South, by Joan Forman. In it the author drives around the South of England through all sorts of little villages and notes any documented cases of ghostly encounters. In the book the author mentioned in passing the church at Fotheringhay, Northhamptonshire and that it “…carries echoes of the fourteenth century in the sound of drums and trumpets from within the building.” Fotheringhay isn’t very far from where I live. I visited the village last year with my sister, though we didn’t go into the church. It started to snow as we crawled into the car to thaw out and neither of us felt like getting out again to see a freezing church. My desire to visit was renewed!

I mentioned to the Goblin that the church was supposedly haunted with ghostly music and hinted we could go take pictures and see the church. On Monday we trundled over there and it was glorious. The sun came out and we were nearly blinded by the beauty.

I stood on the mound, the remains of the keep from Fotheringhay castle where Mary Queen of Scots lost her head in the great hall, and stared down at the countryside in awe. It was so beautiful, the countless greens shifting shades as clouds passed over the sun. I turned to the Goblin and said, “It’s a beautiful place to lose your head!”

He thought that was a morbid thing to say, but it was true.

In one direction the cloudly blue sky reflected in the river Nene winding through emerald green fields. In another the creamy stone steeple of the church rose above a few rooftops.

Mary would have seen the church on her ride to the castle. From either direction, the church towers over the village, it’s grandeur and flying buttresses advertising it’s royal connections. Richard III was born in the castle and if I remember correctly the land was once owned by a Prince of Scotland through his English wife. Was that why Elizabeth had Mary executed there? What a snub!

After we visited the castle grounds, the Goblin went to sit in the car while I investigated the church.

Of course I was hoping to hear ghostly music. I found two other living people inside, but they soon left leaving me alone with the church pews and grand ecoustics. I was expecting something more. The inside seemed rather dull after the grandeur of the outside, but there were remnants of how it might have once looked. Since there weren’t any ghosts making music (that I noticed) I made some up as I looked around. There were several points of interest. Some of the original 15th c church pews had been returned from King’s Cliffe. 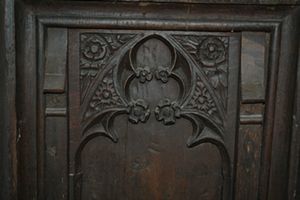 And the cover on the baptismal font was very odd. I would have missed it if I hadn’t stepped up to get a closer look. It looks like a joker…with the black plague boils on his face or something…odd! 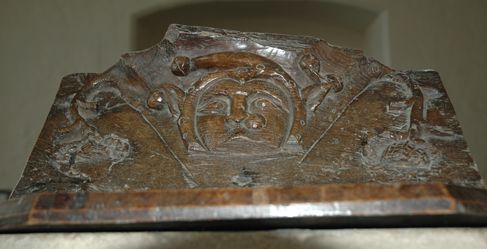 Back outside I wandered around the whole of the church and was shocked to see how many rude people had carved their initials into the building. One had the faded date of 1810!

As seen in the photo…you can make out the first letter is either I or J and then it looks like Dom. If anyone has any ideas what it might say feel free to comment on the Regency graffiti! In future I need to keep some tissue paper in my purse along with a crayon to make rubbings. That way I’ll get a better idea what it might have once said. I obviously did not add any though I did touch the stone, it felt crumbly, like sand stone.

I didn’t hear any ghostly music (or ghostly complainings of my ghastly singing), but I really enjoyed the visit. The whole day was just lovely; one of those days that make you feel glad to be alive. I can understand why a ghost would want to haunt the place. It would be a glorious place to contemplate a rotten end, but call me selfish…I think it’s too beautiful for the dead! 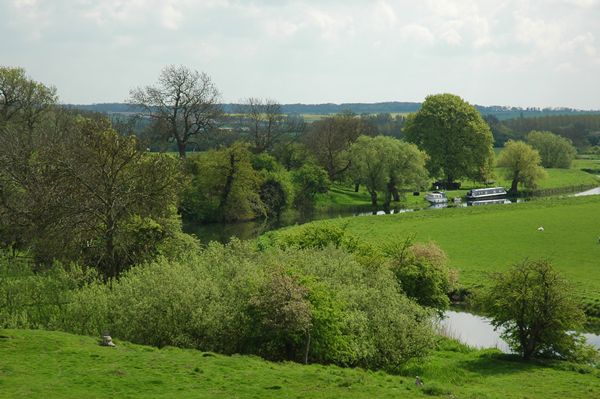 All the scenery pictures, except for the shot of the mound and the church were taken by the Goblin…every time I handed him the camera the light would come out by magic…